Last day of the World Individuals and many of us are very tired & weary.  We were hoping for an easy last day but of course 900 and 1000 yards is never easy and a few of us got wet this morning (first shooters, me included and 6th/7th shooters and their scorers copped a light shower.  Top score in the 800 for us Kiwis was Hagar's 75.12, and he was first down so obviously the rain didn't distract his focus.  But the wind did play havoc for some shooters, hence the variation in the scores.  And perhaps the weariness played a part in some wrong targets (Ross, Gareth??).  Di was so weary, she couldn't even button up her jacket, begging Snowdie to help her get ready for the final shoot.

Boy, were we were tested by the wind at 1000yards!  It was a classic ending to a spectacular week and the top 10 going in to the final stage changed somewhat with many top shooters scoring in the low 60's.  I thought my 58 under those conditions was a reasonable result for a C-grader but I was amazed that many A-graders didn't fare much better than 60. And the sun came out, I tried out the suggestion of tipping water down my back and kept telling myself how cool I am and yup, it worked.

The final 10 shoot-out was a thriller, with the top spot changing yet again and Britain's Richard Jeens shot an excellent 73 to take out first prize.  Then a shoot-off was required for silver and bronze between the 22-yr old South African Andre Du Toit and Britain's David Luckman, 2007 winner of this competition.  I was supporting Andre, cause he was on my squad and a nice young man (cute too) (don't tell John).  And he shot very well under pressure to take the silver medal.  He also won a $7,000 rifle for being the top Under 25'er.

If you are disappointed no Kiwis made the top 10, don't be!  Unless you are actually here witnessing the conditions and the quality of the top shooters, you have no idea how well all the Kiwis did.  We had nine of us on the podium tonight collecting Top 50 badges: 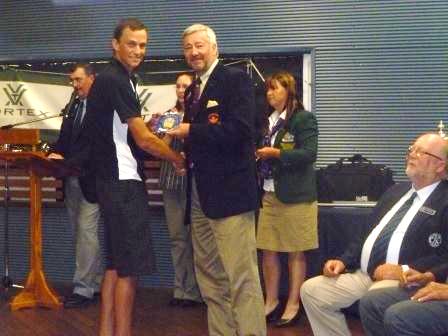 And, Rob Johansen picked up the Silver medal for today's 800 yards.

At the conclusion of the presentation some of us queued up for the $25 seafood platter, which was worth every dollar.

Tomorrow (or today as I don't see me sending this before the morning) is the Palma practice day, which for our team means a team meeting at 8am at the range, at which time I plan to still be in bed.  By the time shooting starts at 9:30 I will have planned my route around the local shopping centres. The final team has not been picked yet, the selectors will make their final decision at the end of today, I will let you know as soon as I find out.