Take a look at the results from NRAA Queens

The final of the Australian Queens today and the forecast is for a chance of rain today so everyone eager to get underway on time.  But the forecast was wrong, thankfully, and it turned out to be a magnificent day for the challenging 900 and 1000 yard shoots.  Many thanks to Darryl Crow for updating my spreadsheet today with the kiwi scores, saved me lots of time and energy walking up and down 47 targets, relaxing instead in the shade whenever I could.

We all agree the #1 success this whole week has been young Charlotte who of course scooped the Queens C Grade Gold Medal, and for today's efforts she picked up Gold for 1000 yards and today's Aggregate (which is a clean kiwi sweep with Lance Wilson winning Silver and Brian Hawksby winning the Bronze medal.  In B Grade Barry Geange won the 1000 yards Gold Medal.

Other Kiwis on the podium this afternoon were Karl Valpy (34th in Queens), Ross Geange (38th in Queens, 27th Grand Agg), John Snowden (47th in Queens, 17th in Grand Agg & 16th in Kaltenberg Cup) and lastly Diane Collings 60th in Queens.  Congratulations to all winners! 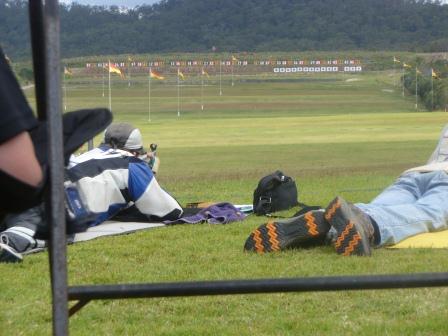 But the grand winner was John Whidden from USA (the second time in a row an American has won this event) with an astonishing 299.33, second was another USA shooter Sherri Gallagher on 298.41. The MC mentioned not only is she a fantastic shooter, she was awarded Soldier of the Year award this year (and I imagine there are many soldiers in the USA!). 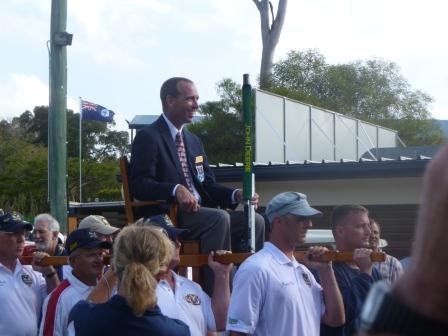 Dinner for the NZ Team was at Springwood Hotel where we had a room set aside for us.  Well, for us and any kids whose parents wanted some peace and quiet while they had their dinner.  So imagine the birthday room at McDonalds.  Give a dozen 5-yr olds a pint of coca cola. And stick 2 long tables in the middle of their playground.  Now you have the scene of our dinner.  My ears are still ringing half an hour after returning to Gateway resort.  But at least the food was good.

I personally had plenty of lowlights today, but one highlight this afternoon was coming across a koala in the tree close to our container, first watching us take pictures then carrying her baby down the tree.  Soooo cute! 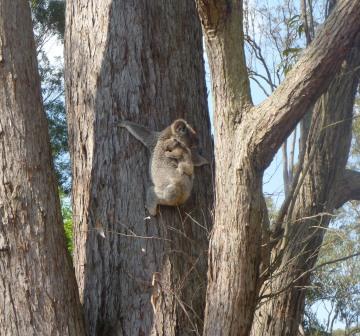 Today's anagram is: Can bar trier  (I shouldn't really pick on this person because he was so helpful to me when I had troubles at 1000 yards)

An finally, true story: at 1000yards, Ken Chittock first to shoot, Range Officer has given the ok to move up the mound and at the same time mentions some lost property.  As the targets come up the Range Officer a bit more insistently bellows: "please check your gear, someone will be needing one of these soon" whilst waving a bolt in the air.  Ken, as cool as a popsicle calmy says "yup, that's mine" (the RO just happened to be walking right past him at that same moment).  A reliable witness says Kendidn't even bat an eyelid, as if he fully expected his bolt to be personally handed to him when he was ready to fire.

That's all from me.  The Under 25's and Veterans have their team matches tomorrow and many of us will be at the range supporting them.  Forecast is for thunderstorms but hey, the forecast has been wrong so many times this week... 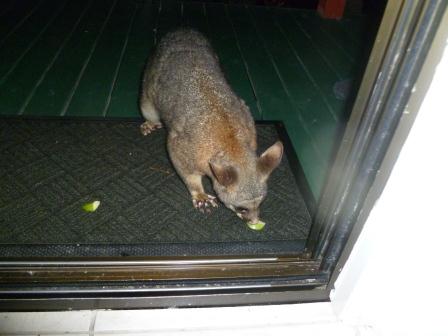